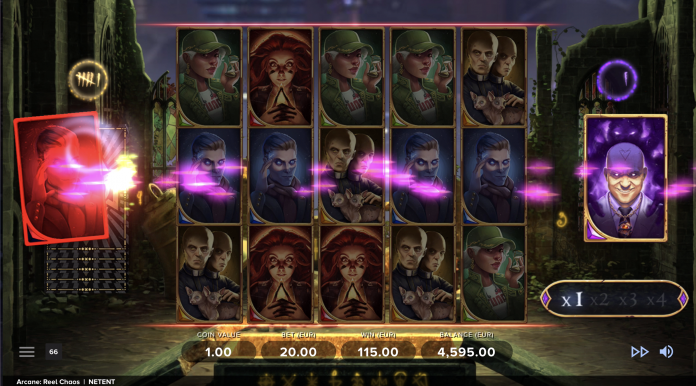 Today NetEnt released a new slot called Arcane Reel Chaos. The theme is loosely based upon mutants and hosts a battle between the mutants and the supervillain. The characters in the game are called Psyop, Flare, Zero.x and Chronos and they fight against the supervillain Deep Pockets (what’s in a name :)). Arcane Reel Chaos features a 5-reel, 3-row and 20- setup. This is also the first of NetEnts new games that features the newly developed UI (User Interface). The big difference between the older slots UI and this UI is that the value is no longer expressed in coins but in currency. Graphically Arcane Reel Chaos has a nice dark feeling to it.

On to the dynamics of the game. The game has 4 small bonus games and 1 bonus which features progressive free spins.

The 4 mini games are triggered randomly by one of the mutants.

When the scatter symbol hits reel 1,3 and 5 the Mutants are going to battle with Deep Pockets. In this progressive free spins feature the battle is waged by winning spins. Each winning spin will take 1 life off Deep Pockets. Taking lives of Deep Pockets will yield higher multipliers. If you don’t score a winning spin, your mutants lose a life. When the multiplier increases you are also awarded an extra Mutant (eg free spin) to combat Deep Pockets. The highest multiplier you can achieve is x4.