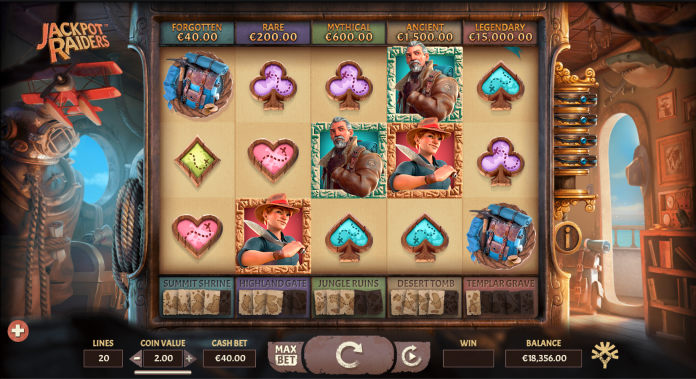 Today the 23rd of May Yggdrasil gaming released a new slot called Jackpot Raiders. Jackpot Raiders is a jackpot slot which takes us along on a trip which is very much Indiana JonesInspired.

Jackpot Raiders has a lot of features which we will try to explain all. The scatter symbol in this specific slot is a compass. When you trigger 3 scatters, the compass symbol will start spinning and either land on free spins feature (jackpot feature) or the bonus feature.

When you get 2 scatters you will receive the option to pick a chest. In these chests are a scroll (later more) 20,40 or 80 coins or the compass which will spin. The below screenshots show you a chest where I was lucky enough to pick the compass. In this case, it gave 10 free spins.

In the free spins feature, you have a chance to win any of the above jackpots. This is done by collecting the gems. If you collect all gems for a specific jackpot, you are awarded that jackpot. All wins in the free spins are also multiplied by 3.

During the regular spins you can also collect parts of maps. Each jackpot has it’s own map. When you collect the full map you are awarded with 10 free spins + 1 gem in that map. There are 5 maps, Summit Shrine which get’s you 1 gem for the Forgotten jackpot, the Highland Gate for the Rare Jackpot, Jungle Ruins for the Mythical one and so on. Image below.

There is also a Bonus which can be awarded when the compass hits the bonus feature. In this feature, you are going on a Treasure Hunt adventure where you can choose one of the 2 main characters. Sir Bear Buckingham and Sam Campbell. Bear has lower rewards but higher success rates. Sam has higher rewards but lower success rates. Once the character is chosen you are on your way to the adventure. In this adventure, you have 3 chances to reach 3 destinations, risky, safe or very risky. The extra reward that you can receive in the bonus game is a treasure. The treasures are stacked on the right side of the reels. Once you get 5 treasures a new free spin game will start (Sunken City) which multiplies all wins x10 and gives a gem in each of the jackpots.

Win a Tesla with Bitstarz